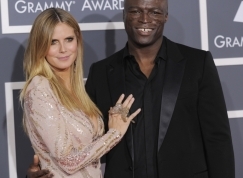 
Over the past five years, happily married Heidi Klum and her hubby Seal Samuel have been an almost perfect example of true love.

Now the power couple plans for a reality show of their own, Love’s Divine, according to new reports. Already making waves on Lifetime with her fashion-based show Project Runway, Heidi is set to take the network by storm with Love’s Divine, the model’s rep confirmed to Gossip Cop.

The show will feature Heidi and Seal helping other couples create romantic, memorable moments together and for their children. The German star knows much about special moments as she and Seal have renewed their vows every year since their original nuptials in 2005.

Heidi and her musician husband have three children together, sons Henry and Johan, and a 7-month-old daughter, Lou. Heidi also has a daughter from a previous relationship with Flavio Briatore, Helene, 6, also known as Leni.