Guy Ritchie Gets the Kids During Christmas 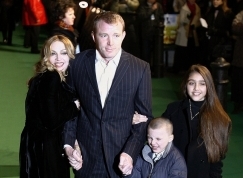 When Guy and Madonna were together they didn’t celebrate Christmas due to Madonna’s Kabbalah beliefs. Source: Reuters


Madonna knows how much her ex-hubby Guy Ritchie loves Christmas, so she's letting him have their children for the special holiday.

A source explained to the Daily Mirror newspaper: “Guy is really pleased, and cannot quite believe he and Madonna came to such an amicable arrangement. He is a huge fan of Christmas and wants to do everything by the book, very traditionally.”

This holiday season is certainly going to be different than the last couple ones the kids had. “When Guy and Madonna were together they didn’t really celebrate Christmas Day due to Madonna’s staunch Kabbalah beliefs. Now that he’s a single man, Guy is determined to spoil them rotten and give the youngsters a Christmas they’ll never forget.”