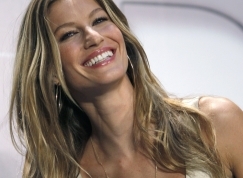 Gisele gave birth to her first child with hubby Tom Brady just month ago, but even after she took a couple of months off, she was still named the highest paid supermodel.

British babe Kate Moss came in at second place with $7.5 million while Gisele's fellow Brazilian, and Victoria's Secret Angel Adriana Lima was third in the list by Walletpop.co.uk.