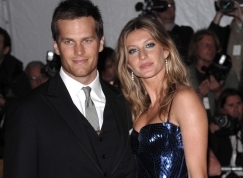 
The 29-year-old Brazilian supermodel - who is expecting her first child with her American football player husband Tom Brady - is said to be thrilled she is having a daughter.

Gisele - who is due to give birth in December - wanted to decorate the nursery pink but has now opted for a nautical theme with green and cream colours.

New England Patriots player Tom - who already has a two-year-old son with actress Bridget Moynahan - recently spoke of his excitement at becoming a father again, insisting it will be easier than his American football training. "It couldn't be harder than this training camp, so I'll be prepared," he joked.