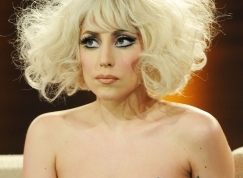 
Lady Gaga may not care about a few extra inches around her waistline, but her “people” do. We hear Gaga’s handlers have been on her case about shedding some extra lbs.

And according to E!, the issue has been subject of concern since last April when she shot her music video for “Paparazzi.”

"Producers had to shoot around her,"'says a witness from the shoot. "They draped fabric over her thighs and shot her backside with a softer lens," adds the source. "They did everything they could to hide her not-so-flattering areas."

And the usual, Gaga has sadly taken the criticism to heart. The insider says Gaga has pretty much stopped eating. "She's already lost about 20 pounds," says a source close to the situation. "She says she is always hungry. She isn't doing a specific diet. She just isn't eating."

antoinettev 07-02-2010 14:21 Fans liked her for being different I guess now she is just falling under the influence of the media just like all the other drug taking, scandal making celebrity!
0

rainerhelin 07-02-2010 14:07 There's a big difference between GaGa in her first video of Just Dance and Bad Romance. Transformation complete!
0