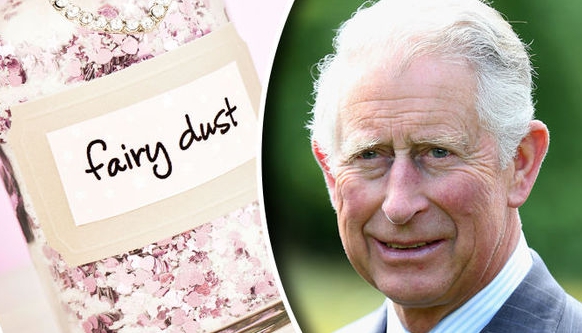 The whacky world of royal gifts is laid bare in an official list published today -- from fairy dust to a bag of salt and a marzipan model of Berlin's Brandenburg Gate.

Palace officials released lists of official presents received by each member of the Royal Family in 2015. From the sublime to the ridiculous, they show that many gifts are a far cry from the sort of glamorous jewellery and priceless works of art that some might think the royals receive.

Prince Charles was given perhaps one of the most unusual presents -- a packet of fairy dust from a fan while touring New Zealand.

But the Queen matched that with a bag of salt from Governor John Duncan of the British Virgin Islands. In March he came to London to revive a tradition of giving a 1lb bag of salt to the British monarch every year as rent for sparsely populated Salt Island in the Caribbean archipelago.

Some gifts proved more useful than others. Prince Andrew, who does not smoke, received a cigarette box from Mexican president Enrique Pena Nieto. Quite what Andrew will do with the hoody and T-shirt he was given in Vietnam in November is also unclear.

Charles, 67, was given armfuls of presents for his grandchildren Prince George and Princess Charlotte during his official travels overseas. Well-wishers gave the proud grandfather everything from practical gifts such as baby booties and a wooden rattle to two giant lollipops.

During her state visit to Germany in the summer, the Queen was given a Brandenburg Gate -- one of Berlin's most important monuments -- made out of marzipan. It was a present from President Joachim Gauk.

Malta's Prime Minister Joseph Muscat gave her one of her a Maltese version of one of her favourite accessories -- a black handbag made by island firm Charles & Ron.

She was also given a framed watercolour of Villa Guardamangia, her much-loved but now dilapidated former home on the Mediterranean island. Her other gifts included the first ball used in the 2015 Rugby World Cup in London.

Ecuadorian ambassador Carlos Abad Ortiz arrived at Buckingham Palace bearing a selection of pink and red roses, while the President of Kazakhstan gave her a white and gold decorated tea service and the Sri Lankan president gave her a sapphire and diamond brooch in the shape of a fern.

US First Lady Michelle Obama gave the Queen a limited edition Tiffany sterling silver honeycomb and bee bud vase, as well as a gift box containing lemon verbena tea, a candle and two small pots of honey and a jar of honey butter from the White House kitchen garden.

Mrs Obama sent the gifts via the American Embassy when she visited the UK in June last year to promote the Let Girls Learn initiative.

When she visited Prince Harry at Kensington Palace she gave him gifts for his nephew and niece, George and Charlotte. There was an American-made Amish rocking chair and a personalised Alpaca baby blanket for Charlotte, while George was gifted a red American-made children's wagon known as a Berlin Flyer P-Wee Wagon.

Kensington Palace, like Clarence House, does not list gifts presented in Britain, so they do not appear on its official list, even though they ultimately belong to the nation.

George was in the thoughts of the Emperor and Empress of Japan who presented Prince William with a soft toy for his son during a trip to the Far East early last year.

President Barack Obama marked Harry's brief trip to the US in October by giving him a mantle clock.

Princess Anne received a jar of pickled garlic scape during a visit to Montreal and a door plaque saying "Princess Sleeping" in Welsh on a trip to North Wales.

Prince Edward received 12 tins of smoked salmon from a member of the public, plus five bottles of white wine, in Canada. He now has an extra five pairs of socks, thanks to a Canadian sock entrepreneur.

His wife Sophie was presented with a jewelled stone brooch from the Czech president in Prague. Other gifts during the Countess's trip included an evening dress, a beaded clutch bag, three pairs of earrings, two brooches and a crystal pendant.

But poor old Princess Alexandra, the Queen's cousin, reported that she did not receive a single gift last year.

Official gifts can be worn and used, but are not considered the royals' personal property. As such, the royals do not pay tax on them.

They can eat any food they are given and perishable official gifts with a value less than £150 can also be given to charity or staff.

Gifts cannot be sold or exchanged and eventually become part of the Royal Collection, which is held in trust by the Queen for her successors and the nation.

The rules on official presents were tightened following the Peat inquiry in 2003 into the sale of royal gifts and the running of St James's Palace.