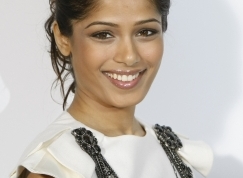 
'Slumdog Millionaire' actress Freida Pinto  is set to become the next Bond girl, and the role comes with a big paycheck.

A source said: "Sam has been talking about Bond for months now and is so excited about it. The project has been in the pipeline for months and Freida was always the dream Bond girl, but initially she was nervous about accepting it. This is going to be the most ambitious 007 yet. Sam plans to reinvent the genre.

"Peter Morgan, who wrote 'The Queen', has penned the first draft of the script and it promises to be visually stunning."