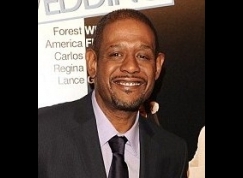 
Forest Whitaker (48) is a mere shadow of his former self these days as the weight continues to fall off. The actor shocked Hollywood with his dramatic weight loss when he stepped out on stage at last Sunday's Oscars to present an award.

Whitaker won the Best Actor Oscar in 2007 for his role as brutal Ugandan dictator Idi Amin in The Last King of Scotland. For the role, he reportedly put on 70lbs (31 kg) and after filming, he said he 'got serious about diet and exercising' including hiking and martial arts.

The same year, he continued to lose the weight after he landed the role as Lieutenant Jon Kavanaugh on US police drama The Shield. He has also cited his vegetarian diet as a good way to lose weight and avoid health issues such as heart disease, diabetes, and several types of cancer.

Whitaker has just signed up to play another huge role, this time stepping in the shoes of the late jazz musician Louis Armstrong for the film What a Wonderful World, which he will also direct. He is also starring alongside Jude Law in the upcoming sci-fi thriller Repo Man, which is released next month.

Get that beach beautiful body now! (5)

Cheat Your Way To Fat Loss (The Right Way)