Fergie: 'I Used to Be the Cheater' 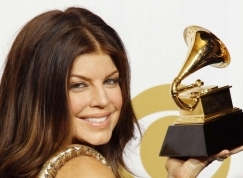 
She has a hit song about not "phunk"ing with someone's heart, but the singer Fergie confesses she was once guilty of doing just that.

"When I was younger, I used to be the cheater," the Black Eyed Peas singer, 35, tells Elle in its May issue, on newsstands April 14. "I'm not talking about going all the way – I wasn't doing that in high school!"

She explains more precisely: "I'd have boyfriends and then spring break would come around and I'd be a little bit naughty."

But the performer's relationship style has, of course, completely changed, especially since marrying Josh Duhamel in January 2009. "I'm a relationship girl, a romantic," she says.

"You grow a deeper love for each other, besides the initial lust and falling in love and all of that," she adds about their marriage, which was rocked in November after a stripper claimed she had an affair with Duhamel. The couple denied the allegations. "You come to know each other a lot better, you grow together," she says, "and it makes you love each other that much deeper."