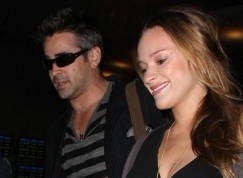 
Colin Farrell and his girlfriend took a trip to Poland this week to have their baby son baptised.

After jetting back to Farrell's native Ireland for the holidays, the couple was on hand to attend the star's brother Eamon's marriage celebrations in Dublin on Sunday. The couple then flew to Poland to visit Bachleda's family and organise a baptism for their son.

Farrell and Bachleda were photographed attending an hour-long service at a church in Krakow, Poland on Tuesday (29Dec09).

Farrell has another son, six-year-old James, with his ex-girlfriend Kim Bordenave.