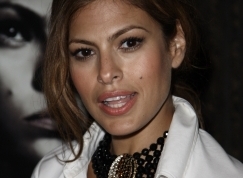 
The two sexiest women on earth show off their bodies in new add campaign pictures! While Megan Fox strips down to her underwear as the new face of Armani, the latino actress Eva Mendes gets well oiled to shoot Calvin Klein´s newest add.

Eva Mendes (35) is fast becoming more famous for her risque ad campaigns rather than her acting. The actress smoulders in her newest Calvin Klein campaign, undoubtedly her hottest outing to date. Eva reunited with Keira Knightley's ex, model Jamie Dornan, for a series of racy shots. The oiled up pair writh on top of one another in the sand, clad in nothing but their favourite Calvins for the designers new Whitewashed collection. The adverts are due to hit billboards this spring, and looks set to attract the attention of censors all over again.

As for the Transformers star Megan Fox (23), shots released today show the brunette pouting as she poses in underwear, skimpy mini skirts and tight shirts. Designer Giorgio Armani said: 'Megan is young and sexy and has a lot of spirit.'