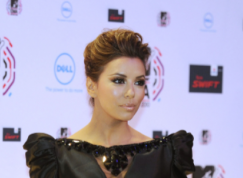 Eva Longoria appeared "defeated" on a recent night out with friends.

The 'Desperate Housewives' actress - who is in the process of divorcing husband Tony Parker - was surrounded by dozens of pals at Hollywood's Chateau Marmont on Saturday (04.12.10), and though she put on a brave face, she couldn't hide her sadness.

One onlooker said: "She wasn't her feisty little self. If I could describe her energy in one word, I would say 'defeated.' Eva was smiling and even laughing at times, but it was so apparent that underneath it all she was sad and hurt. It was very obvious. She had a grin on her face, but every so often she would stare off into space and looked very sad and sombre."

Despite her sadness, Eva and Tony - who married in July 2007 - are attempting to keep their divorce civil and were even spotted having lunch together last week, with pals saying they met to "work out the details" of their split.

It was recently claimed that the 35-year-old star's close pal Victoria Beckham had urged all their friends to rally round and support the actress through her heartbreak. A source said: "Victoria has rounded all the girl troops in their inner clique so they can have some girly time and relax. She has given her some sexy VB dresses to cheer her up and is planning a night out for Eva with all their celeb friends."