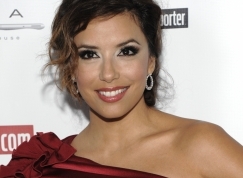 
Eva Longoria Parker has been honoured for her tireless children's charitywork. The Desperate Housewives star is the national spokesperson for Padres Contra El Cancer (Parents Against Cancer), which aids Latino children withcancer, as well as supporting their families.

The beauty also founded Eva's Heroes, an organisation which provides after-school programmes for kids with developmental disabilities in her native Texas. And her hard work has been recognised - she has been named as The Hollywood Reporter's Philanthropist of the Year.

Publisher Eric Mika says, "I've never met a more conscientious and socially aware young, energetic talent. Eva's efforts on behalf of the causesnear and dear to her are Herculean.

"She pours her free time and energy into raising millions of dollars for charitable missions that make a difference in the Latino community and other humanitarian organisations".