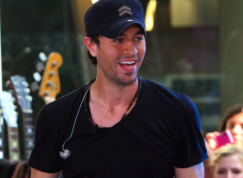 
POP hunk Enrique Iglesias has water-skid naked along the coast of Miami after losing a bet.

The singer has reportedly kept a promise and completed the nude stunt after vowing to strip off if his native Spain won the World Cup . Sources told gossip website TMZ — which has grainy footage of a man believed to be Enrique completing the task — the water-skiing took place “at the end of July” because “a bet is a bet”.

Enrique’s spokesperson refused to confirm if the man in the clip is in fact the 35-year-old singer, but admitted it was likely to be him. “We do not manage Enrique’s personal time schedule but we do know he was in Miami the last week of July,” said the rep.

Enrique first revealed his plans back in June. “If Spain wins, I’m going to get drunk and ski naked in Biscayne Bay… That is what we used to do when we were kids,” he said.

Although he was happy to complete the naked challenge, Enrique made sure there were a number of conditions adhered to first. “I had to be a little drunk,” he said. “It had to be late, late at night and the thing about the bet, what’s scary is that Miami’s full of sharks, so you don’t want to fall, middle of the night, naked in the ocean. It’s not fun — especially drunk.”