Enrique Iglesias: Fans Will Be Surprised by New Album!Video! 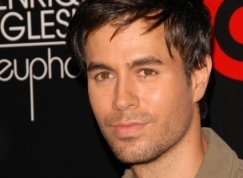 When Enrique Iglesias invites you to his album launch party in Hollywood, you go! Hollyscoop got EXCLUSIVE one-on-one time with the uber-sexy artist, who just released Euphoria, his 11th studio album.

“It feels good,” Enrique told Hollyscoop, saying that he thinks this particular album is very different from anything he’s done in the past. “What I like about this album is that it’s more eclectic than anything I have done in the past; there is a little bit of everything. I think every song is a completely different world. I think fans are going to be surprised; That is what I truly wanted to create, a very eclectic album. It’s got cool collaborations whether its from Usher to Akon, Nicole Scherzinger to Pitbull, it’s really good.”

We talked with him about his single “I Like It,” which is currently at #5 on iTunes. “I actually wrote that song two years ago. It’s suddenly strange to have it here two years later. The response has been so good.” We asked him about the Lionel Richie part of the song, where he came back into the studio to re-track his original chorus for “All Night Long.”

“I got to work with him and it’s just an honor to have him in the song,” Iglesias explained. “It’s actually kind of funny when you think about it, you get Lionel Richie to come into the studio sing just one quick line of his most recognizable song. I did not think about it until it was done and said, ‘Whoa that is crazy.’”

As for the album as a whole, Enrique told us it was his first foray into collaborations. “I never used to do that many collaborations,” he said. “I realized that when you collaborate with people especially when they come from different musical backgrounds sometimes it takes you out of your comfort zone which is good. That is the only way to learn, push and go forward and change things up a bit.”

If you’ve seen the music video for “I Like It,” you know Enrique hooked up with the cast of Jersey Shore, whom he joked that he’d been trying to call for three years. He told us, “It was fun making a video with them. I think a lot of people watch the show and think there is going to be drama, its going to be crazy and there is going to be fighting. I did notice they have a bunch of bodyguards but I think they probably need them since they are very popular now. What I liked about the guys is that they were very down to earth and very easy to work with. We really got along.”

Wow! Setting the record straight on the JS kids that they really aren’t divas! Check out Hollyscoop’s EXCLUSIVE interview with Enrique below, and buy Euphoria available on Itunes now!