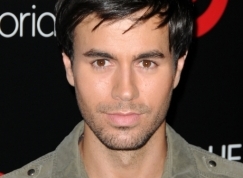 
Enrique Iglesias broke down in tears when the girl he had a crush on refused to go to his prom with him.

The sexy Spanish singer — who’s currently dating tennis star Anna Kournikova — admits he was “devastated” when he was rejected by a fellow student at his high school.

“I had no luck with the ladies,” Enrique told MTV for its When I Was 17 program. “I was going to prom with this girl that I really liked and she said that she had decided that she wasn’t gonna go with me. It was devastating. When you’re in high school and a few weeks before prom the girl you’re going with says no, it’s awful. At the time, my whole world came crumbling down. I probably did cry. I hate to admit that now, it’s kind of embarrassing. Such a wuss. I went to my prom alone. I know it sounds awful, but I went with my friends. I had a good time. For all you guys out there: it’s OK to go to prom by yourself. You don’t need a date for prom.”