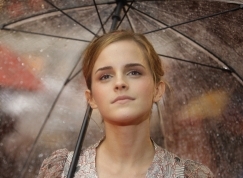 
Emma Watson is the highest paid actress of the past decade. The 'Harry Potter' star - who plays Hermione Granger in the wizard film series, which started in 2001 - has been awarded the title by the Guinness Book of World Records.

The 19-year-old star's starring role in the six films, as well as her voice part in animated movie 'The Tale Of Despereaux', helped take $5.4 billion worldwide, putting the takings ahead of some of Hollywood's big players including Julia Roberts, Halle Berry and Cameron Diaz.

She also boasts the highest average box office receipts per movie, with each of her films making an average of $897, 100,000.

Emma attended the open auditions for the first 'Harry Potter' in 1999, when she was just nine, and had no idea what she was letting herself in for.

Daniel Radcliffe Was Smoking Pot at a Party (2)