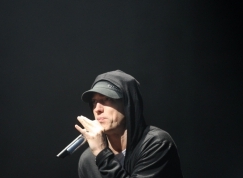 
Eminem says Elton John calls him “once a week” to make sure he’s steering clear of drugs.

The Stan hitmaker first reached out to the music legend at the height of his drugs problem and Elton helped him kick the habit. And the pair have kept in contact ever since.

“Elton John calls me once a week,” the hip-hope star tells Spin magazine. “He used to tell me stuff like, ‘You’re going to start seeing certain things you’ve been overlooking’. And it came true. I’d walk around like, ‘Damn, that tree does look crazy, look at all those leaves!’ Things I didn’t notice when I was f**ked up.

Eminem has previously discussed  how he was once “hours away” from death. It took me a while to admit I actually did have a problem,” he said. “In the hip-hop world that I live in, it can be mistaken for weakness and the last thing you want to do in hip-hop is admit that you’re weak. But if I didn’t admit I was weak with this certain thing I was going to die.”