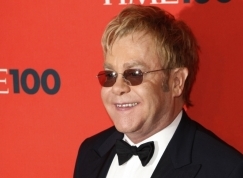 
Controversial comments Elton John made about Jesus Christ in a recent magazine article have cost him a gig in the Middle East.

Officials at Egypt's Music Union have banned the gay Brit from performing at an upcoming show, claiming he insulted Middle Easterners with his remarks.

In a Parade interview, which was published in America in February, Elton suggested Jesus was a "super-intelligent gay man" and then took aim at the Middle East, stating, "Try being a gay woman in the Middle East - you're as good as dead." The singer/songwriter was scheduled to perform in Egypt on 18 May

British and Spanish men are related to Tutankhamen