Duke and Duchess of Cambridge Touch Down in Vancouver 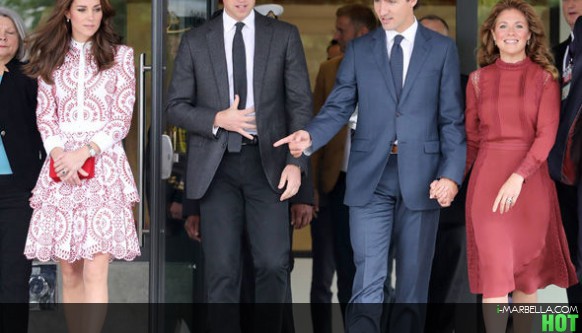 
Duke and Duchess of Cambridge visited Vancouver on day two of royal tour.

Kate wore the red and white tiered dress with broderie anglaise detail for a 30-minute £125 flight from Victoria to Vancouver with Prince William on the second day of their official visit to Canada.

The couple were greeted by thousands of cheering fans when they arrived in Vancouver and went on a walkabout through the crowds.

They travelled on a Canadian-made DHC-6 Twin Otter aircraft, an iconic sight in this part of the world, on the journey between British Columbia's two largest coastal cities.

It was a rainy, misty morning on the west coast but the couple were still able to enjoy scenic views of the coast, islands, and the Strait of Juan de Fuca before their plane touched down in Coal Harbour.

"We are delighted to share this quintessential west coast experience with the royal couple," Randy Wright, executive vice president of Harbour Air, said.

For William and Kate it was the easiest, the quickest, and the most spectacular way of making the journey from Victoria, the capital of British Columbia, which lies 70 miles across the Georgia Strait on Vancouver Island.