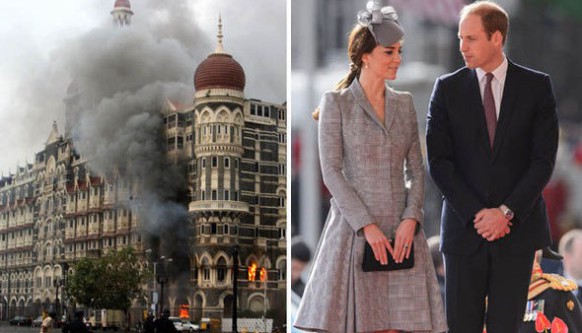 The Duke and Duchess of Cambridge are to show their solidarity with India's fight against terrorism by staying in a hotel where 32 people died during the 2008 Mumbai massacre.

William and Kate are to follow in the footsteps of Prince Charles and US President Barack Obama by staying at the Taj Palace Hotel in the city, where 164 people and nine terrorists died during four days of coordinated attacks by the Pakistan-based Islamic militant organisation Lashkar-e-Taiba in November 2008.

The five-star hotel, which has become a symbol of the city's determination to overcome terror, will be their base in Mumbai at the start of a landmark seven-day tour of India and Bhutan next month, a week before the Queen's 90th birthday. On the tour, William will pay tribute to his grandmother in a highly personal speech. Aides said he was also keen to pay tribute to his late mother Princess Diana during a visit to the Taj Mahal at the end of the tour on April 16.

It was at the Taj Mahal in Agra in 1992 that Diana, alone and grieving for her crumbling marriage to Prince Charles, posed for one of her most iconic photos.

Jason Knauf, the Duke and Duchess's spokesman said: "The Taj Mahal is one of the symbols of India and Their Royal Highnesses cannot wait to see it with their own eyes.

"The Duke of Cambridge is of course aware of the huge esteem his mother, the late Princess of Wales is held in India and he appreciates the iconic status of the images that exist of the Princess at the Taj.

"He feels incredibly lucky to visit a place where his mother's memory is kept alive by so many who travel there. 24 years on from her visit to the Taj, the Duke and the Duchess are looking forward to seeing this beautiful place for themselves and creating some new memories as they say thank you to the people of India at the conclusion of this tour."

It will be the first visit to India for both William and Kate, who hope to develop a close relationship with the nation, the Commonwealth's most populous country and an increasingly important trading partner for Britain. Their trip to the remote Himalayan kingdom of Bhutan is intended to help a flourishing relationship with its glamorous young King and Queen.

Flying from Britain on a scheduled flight, William, 33, and Kate, 34, will begin their visit to India on April 10 by paying tribute to the victims of the 2008 atrocities and the bravery of those who fought back and helped rescue hostages, including many foreigners among the 250 guests saved at the Taj Palace.

At a Buckingham Palace briefing today, Mr Knauf said: "The Taj was one of the scenes of the terrorist attacks in Mumbai in November 2008 and is now an iconic symbol of the city’s resilience and strength.

"The stories of the bravery and dedication of the staff there are now known around the world. The Duke and Duchess are following in the footsteps of other world figures, including The Prince of Wales and the US President who have both used their stays at the hotel to display solidarity with the people of this great city.

"On arrival, they will lay a wreath at a memorial inside the hotel and meet members of staff who helped protect guests during the attack."

The royal couple will also visit Delhi, where they will honour the memory of modern India's founding father Mahatma Gandhi and see the spot where he was assassinated.

They will also visit Kaziranga National Park in the state of Assam to see rhinos and other wildlife before flying to Bhutan, where one of the highlights will be a five or six-hour hike to Paro Taktsang, the Tiger's Nest monastery which dates to 1692. They finish their tour at the Taj Mahal in Agra before returning on a scheduled flight.