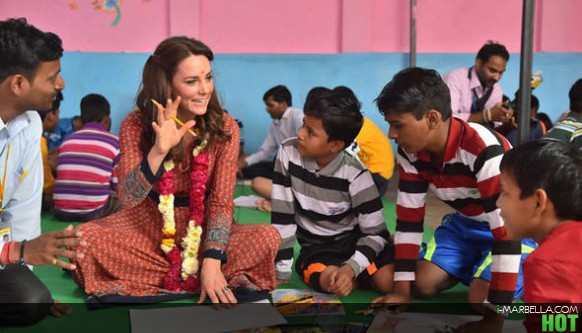 The Duke and Duchess of Cambridge reached out to some of India's poorest children today on a visit to a charity helping young people literally on the wrong side of the tracks.

They went to the charity's contact centre near the station where up to 7,000 vulnerable children arrive by train in the capital every year, often alone and escaping abuse.

Charity workers told the couple how they focus on the children's mental health and provide physical and medical care for them to help them get over the trauma of life on the streets.

William, 33, and Kate, 34, are on the third day of a week-long tour of India and neighbouring Bhutan.

This morning they also went to one of Salaam Baalak¹s temporary shelters for boys, located close to the train station.

They heard how the trust always tries to reunite children with their families.

But if that proves impossible it finds a place for children in one of its shelters, where support includes education and vocational training The royal couple met boys living at the shelter and spent time with them doing regular activities such as reading and drawing.

Salaam Baalak Trust was set up in 1998 with the proceeds from the film Salaam Bombay, a film depicting the lives of vulnerable street children.

The name Salaam Baalak means 'salutes the child'. The trust runs five children's shelters for 500 children and 13 contact points in and around Delhi, supporting children living and working on the streets.

Many of the children who end up at the train station become targets for prostitution, people trafficking or sexual and physical abuse.

The charity helps children aged from 5 to 18. Kate, wearing a striking full-length patterned red dress, and William first joined in a lesson with boys who were living in the nearby station.

The couple sat down and William asked: "What's the game you're playing? Ah, karom board. "Can you show us how to play?" Flicking the draught, he laughed as it went too far and invited his wife to have a go.

"The boys come here for four hours of lessons and some food every day.

"When they're not here, they're at the railway station".

William asked:"Is that dangerous?" Mr Roy replied: "Yes so they try to stick together.

"They often have to deal with trauma, learning difficulties, ADHD and we have special programmes to help them with that.

"These children that we look after are the most vulnerable.

"Some may have their eyes gauged out or hands hacked off.

"The primary reasons they run away from home are misunderstanding with step-parents, physical and mental abuse, incredible poverty or a life event such as forced marriage."

The charity has six homes, 21 contact centres and 3 Childline centres near stations, bus stands and railway stations across Delhi.

William asked: "What can we do to help?" Mr Roy replied: "Spread the word. People think of them as street kids, beggars, thieves but they are just children.

"They deserve an education, future and a life.

"They have a right to a childhood."

The Duchess was wearing what was thought to be an Anita Dhongre-designed dress but Kensington Palace refused to identify the make.

Some of the boys that she and William met at the drop-in centre, housed in a room in Delhi station's police headquarters, were recovering drug addicts.

They met Amir, 16, who became addicted to glue-sniffing nine months ago while living rough at the train station.

Counsellors from Salaam Baalak helped him get detox treatment and now he is clean.

William asked them what they hoped to be in the future. One said a doctor, another a policeman and a third wanted to run his own shop.

The couple were then introduced to Dr Amit Sen, head psychiatrist, Dr Mazhar Khan, mental health councillor and Praveen Jha, from Childline India, which works in partnership with the charity.

"In the UK you ask them and they say footballers or pop stars.

"Is there the opportunity for them to do it, to have these professional careers? That's the question."

The charity's managing director Sanjoy Roy said: "We hope so. We lookafter around 7000 kids a year but cities are not the place for kids.

"If we can't get them home the only thing to do is to send them back to school as soon as possible.

"We want them to study to enable them to have a future."

As part of their mission to highlight mental health issues, the couple were very keen to learn about how the subject is viewed in India.

Kate asked: "What's society's view on mental health? Is it spoken about or is there stigma?"

William commented: "In the Western world it still hasn't elevated itself to the highest levels."

Mr Roy said that it was spoken about but the charity has been asked to work with the government and "spread the word".

He said: "On the last census 110 million children were out of school and mental health is a real challenge.

"We want it to be looked at as a major issue."

Kate interjected: And as early as possible."