Duchess of Cambridge to Visit The Netherlands 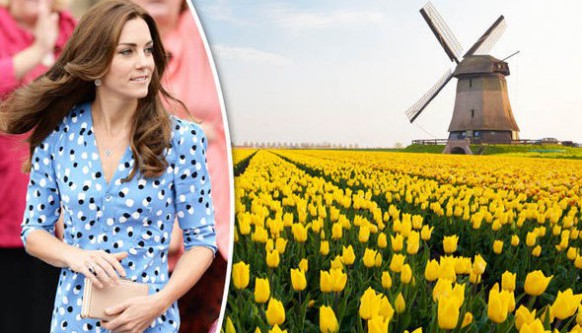 he Duchess of Cambridge is to carry out her first solo overseas trip, travelling to Holland next month for a day of engagements including a courtesy call on King Willem-Alexander.

Kate will spend the day in The Hague and Rotterdam where her itinerary will cover a range of events from a visit to an art exhibition of Old Masters to a round table discussion on a variety of themes from addiction to mental health.

The one-day trip, planned for October 11, will be a royal milestone for the Duchess as she will be travelling abroad by herself without the Duke.

A tour of Malta in 2014 was scheduled to be Kateэs first solo trip but she had to cancel as she was suffering from acute morning sickness while pregnant with Princess Charlotte.

The family home is on the forested De Horsten estate in Wassenaar near The Hague, and despite being a private residence the Dutch monarch sometimes hosts foreign guests.

Art is an interest of the Duchess, who is patron of the National Portrait Gallery, and later she will travel to the Mauritshuis art museum in The Hague to see an exhibition featuring Dutch old masters loaned by the Royal Collection -- artwork, furniture and other objects accumulated over centuries by the British monarchy.

The highlight of the attraction will be Vermeer's The Music Lesson and Kate will see the painting after she has toured the gallery's permanent collection.

Before leaving the Duchess will meet children taking part in the gallery's learning programme and attend a short reception with museum supporters.

At the official residence of Sir Geoffrey Adams, Britain's ambassador to the Netherlands, Kate will convene a round table discussion on the themes of addiction, intervention, family, and mental health.

Sitting at the table will be professionals from the Netherlands' Trimbos Institute, a non-profit research centre working on the issues of mental health and addiction.

They will be joined by counterparts from two of the Duchess' UK charities -- the Anna Freud Centre for Children and Families, a leading charity in the research, teaching and the provision of care for children and young people with mental health issues, and Action on Addiction.

Later Kate will travel to the neighbouring city of Rotterdam to learn about a community initiative that provides a public workshop in an economically deprived district, with its facilities aimed at teenagers.

Residents pay by sharing their skills with others, providing education, skills, and positive role models within the neighbourhood.