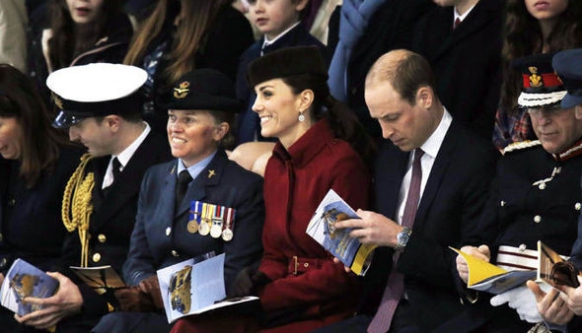 The Duke and Duchess of Cambridge returned to Anglesey for a service and parade to mark the end of RAF Search and Rescue after 75 years.

William, who used to work as a helicopter pilot for the service and lobbied Prime Minister David Cameron in vain to prevent it being privatised, caught up with former colleagues after he and Kate attended the event in the RAF Valley hangar.

It marks William's second public engagement of the year.

The royal, wearing a suit, sat beside Kate, who was wrapped up against the chilly weather in a coat by LK Bennett and a hat by Lock & Co, after flying to the base in North Wales by chopper.

Kate, 34, and William, 33, lived in a cottage in Anglesey for three years and enjoyed the seclusion that the Welsh countryside offered as they settled down.

However, William left the force in September 2013 after their son George was born.

He spent a 'transitional' year working on charity projects, learning about farm management, and taking on a small number of more senior royal duties, before joining East Anglian Air Ambulance.

This new job saw him closer to the couple's 10-bedroom country mansion, Anmer Hall, on the Queen's Sandringham estate in Norfolk.

Senior royal sources have said the job and move to Anmer -- after the couple spent £4.5 million refurbishing the 22-room apartment at Kensington Palace -- was arranged because William wanted to live the lifestyle of a gentleman Norfolk farmer like many of his friends, known as the Turnip Toffs.

William may well have signed on for another tour of duty with the RAF if the service had not been earmarked for privatisation, according to some sources, as he and Kate enjoyed living as a service couple hidden away from the glare of publicity for much of the year.

His former squadron commander, Wing Commander Sparky Dunlop, praised William for his time in the service.

He said: "He was not only up to doing it but he did more than that.

"When he was serving with us he was a very good pilot.

"I did his operational captaincy check, when you jump from co-pilot to captain, and he was given a very tough check and he more than rose to the occasion.

"He would come on shift and do all the duties associated with going on shift.

"He was just another one of the guys.

That welcome, however, did not extend to the majority of the royal press pack.

Only a handful of media were allowed to cover the event after Kensington Palace claimed there was insufficient space in the giant hangar.

RAF Search and Rescue was disbanded in January after 75 years, and the service was privatised and is now run by civilian company Bristow Helicopters Ltd on behalf of the Maritime coastguard agency.

RAF SAR Force Commander Group Captain Steve Bentley said: "The parade provides a chance for us to reflect on the achievements of the RAF Search and Rescue Force in the UK.

"Not only has the Force contributed to saving many lives, but the pioneering work of the RAF SAR Force... developed many of the life-saving techniques which are in use today by others around the world."