Dr. Murray to Be Charged for Jackson's Death 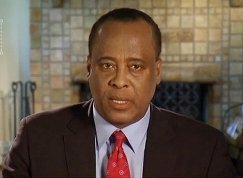 
Dr. Conrad Murray, who is believed to be responsible for Michael Jackson's death, will surrender today if formally charged. Murray is facing involuntary manslaughter charges after prescribing several different drugs to Michael including the powerful anesthetic Propofol.

Jackson’s original death certificate said the superstar died of “acute Propofol intoxication,” but months later it was changed to "Homicide." Earlier this month, it was amended by the Los Angeles County Coroner’s office to include the words “by intravenous injection of another.”

Murray is in LA with his team of lawyers waiting for his fate and is said to be “cooperating fully” with the investigation. “He is in Los Angeles to meet with his legal team, take care of some family business and continue to cooperate with law enforcement,” explained Miranda Sevcik.

“There has been no specific request from officials for his presence. The District Attorney might have a plan, but they aren't telling us. But as we've said from the beginning, any time law enforcement want us at the courthouse, say the word and we'll cooperate. He's always planned to surrender if asked.”

Murray’s lawyer Michael Flanagan also added, “In the event of charges being filed in connection with Michael Jackson's death it would be much cheaper for tax payers if I am able to surrender Dr. Murray myself. I am hoping the District Attorney will make the right decision and allow me to do this.”

The Los Angeles County District Attorney’s Office and Los Angeles Police Department (LAPD) have been working on this cause since Michael's death seven months ago, so we're sure they're eager to finally arrest him.