Dolly Parton does Makeup at 3 am 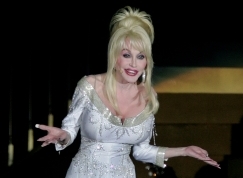 
The country singer - who has had a number of cosmetic surgery procedures, including having her breasts enlarged to a 40DD cup - still takes a great deal of pride in her appearance at 64 and likes to look perfect for her husband Carl Dean when he wakes up.

Dolly, who has been wed to Carl for 44 years, said: "I usually get up at 3am. I don't require a lot of sleep and if I get tired, I'll take a powernap during the day. When my Carl is awake, I'll put on my make-up and roll my hair a little, because I don't want to look bad for him, do I?"

Dolly also insists she never had sex with anyone to further her career when she was starting out in the tough, male dominated country music industry.

She said in an interview with the Daily Mail newspaper: "When starting out, I looked easy and people didn't take me seriously. I always looked like I could be had and I still do! But the truth was, I couldn't.

Dolly also rubbished rumours of affairs with any of her handsome film co-stars, which include Burt Reynolds and Sylvester Stallone, saying she could never love anyone other than the reclusive Carl, a former construction worker. She added: "When I met Carl, I wasn't a star - I was just dreaming of being one, so I know he doesn't love me because I'm famous."