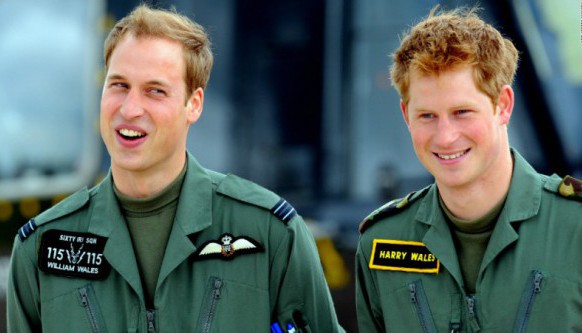 
The British Royal family lives in the public eye, but one thing about a lot of people don't know: Their last name.

In general, they are so famous that they don't need a last name, they're easily identifiable without one.

Members of the royal family need to use the last name only and when they're in school or in the military, then they actually have a few choices. Here is how this story started.

Back then, royalty had only their first names and the name of the house or dynasty they were part of, according to the Royal Family's official website. You've probably heard of some of these dynasty names, like the House of Tudor and the House of York.

In 1917, when King George V had been on the throne for seven years, he changed the house name from Saxe-Coburg-Gotha to Windsor. He decided to switch because of anti-German sentiments brewing at the start of World War I (the Saxe-Coburg-Gotha name was of German origin). "Windsor" came from Windsor Castle, one of the royal family's properties.

But he wasn't just changing the dynasty name. George V also specified that Windsor was to become the royal family's official surname, too.

Today, the royal family is still known as the House of Windsor, and in a broad, general sense, Windsor is still the royal last name.

When Queen Elizabeth II came to power, she made a slight modification.

In 1960, Elizabeth and Philip decided that they wanted to differentiate their particular branch of the royal family tree from all the others. They decreed that their descendants would carry the hyphenated last name Mountbatten-Windsor.

Some members of the royal clan have used their family's territorial designation instead. For instance: When Prince William and Prince Harry served in the military, they went by William Wales and Harry Wales — because their father is the Prince of Wales. And The Daily Beast reports that Princesses Eugenie and Beatrice have gone by Eugenie York and Beatrice York, since their father, Prince Andrew, is the Duke of York.

Princesses Eugenie and Beatrice with their mom

There are few other last names kicking around, too: Princess Anne's kids simply took their father's last name — Phillips. And the daughter of Prince Edward, Earl of Essex, just goes by Windsor, without the Mountbatten.

As the Royal Family's official website notes: "A proclamation on the Royal Family name does not pass into the law of the land." No one's really forced to use the official surname, and newly crowned kings and queens aren't bound to follow the surname rules set by their predecessors.

Unsurprisingly, the complicated royal family has a complicated buffet of acceptable surnames. Technically, their last name is Windsor, though direct descendants of the queen can use Mountbatten-Windsor if they ever need it. Some royals use territorial names, but most — including the young Prince George and Princess Charlotte — stick to first names only.