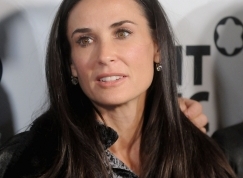 
First it was pointed out that a chunk of her hip was missing in a photoshoot. Now fashion observers are even saying it might not be Demi Moore's body at all on the cover of W magazine.

Questions are now being asked whether the body on the cover actually belongs to catwalk model Anja Rubik. Fashion observers pointed out the remarkable similarity between the magazine image and photographs of the Polish model wearing the same Balmain corset dress on the runway in Paris earlier this year.

They claim the neck, collarbone and arms are all but identical in the two pictures and that Moore's head may have been superimposed on the body of Rubik. But the actress took to Twitter to hit back at the claims and posted the 'original' shot for her fans. She told them: 'My hips were not touched... it's just the way u have ur hip kinda swung to one side... y can noone see this!? Idiots!'

A spokesman for W said that the magazine 'did not do anything unusual or out of the ordinary on Demi Moore for the photo on the cover of W. Demi is an extraordinarily beautiful woman and we feel our cover reflects that.' But there are still many people who do not totally believe it!

Ashton: Arguing with Demi made me realise I loved her (4)

Demi and Ashton Want a Baby