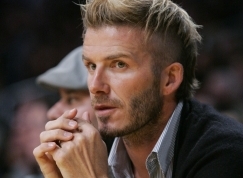 
Football world's most high-profile star David Beckham suffers with asthma. The revelation came after Beckham was seen using an inhaler at half-time during LA Galaxy's major League soccer cup Final on Sunday which his team lost 5-4 on penalties.

His exertions put such a strain on the 34-year-old football superstar that he was left short of breath.
Amazingly, despite having lived with the condition since childhood, it is the first time the former Manchester United and England international, had ever been pictured using his inhaler.

But the player's agent Simon Oliveira confirmed the superstar player has asthma, confirming: 'David has suffered with this since he was a young boy.' Beckham takes regular medicine to control his asthma, which makes it all the more remarkable that he had managed to keep his condition under wraps for so long.

Asthma is caused by inflammation of the airway, which can make breathing difficult and cause coughing, wheezing and shortness of breath.