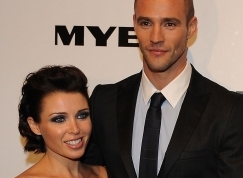 
Australian singer Dannii Minogue is "over the moon" after falling pregnant with her first child with her rugby player boyfriend Kris Smith.

The news has increased speculation she may leave the judging panel on the show, alongside Cowell, Cheryl Cole and Louis Walsh, when the programme returns, reports the Daily Mirror newspaper.

A source tells the publication, "It would be completely understandable if she wanted to take time off to bond with the baby rather than trying to juggle the auditions with the demands of motherhood. At present, she's not even thinking that far ahead. She is over the moon at being pregnant and can't stop smiling."

Minogue's superstar sister Kylie is said to be "so excited" about the news. In October Minogue revealed Smith "would love a baby" and asks her "on a daily basis" to start their own family.