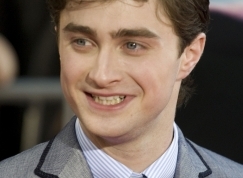 
The 'Harry Potter' star - who already owns two other lavish properties in the New York - has spent the enormous sum on a five-bedroom townhouse with four luxury bathrooms, six fireplaces and a beautiful garden in the West Village.

The estate agents brochure reads: "The property is on one of New York's most picturesque tree-lined landmark cobblestone blocks. The house faces south, and is soaked in sunlight throughout the day. The sizeable open garden and backyard is cooled by beautiful old trees and landscaping.

The house - which includes a separate apartment on the ground floor and cost £3.76 million - is one of three adjoining properties built in 1847 by a sea captain for his daughters.

According to Yahoo news, the 20-year-old actor's property empire is now worth over £10 million. In 2007, he splashed out £3.2 million on a fifth floor apartment in the SoHo district. Later that year, Radcliffe spent another £3 million on a three-bedroom condo in the city's West Village.

Daniel Radcliffe Was Smoking Pot at a Party (2)