Dad of the Year Peter Andre 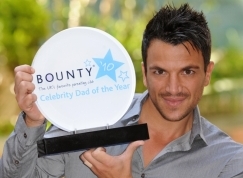 
Peter Andre has been crowned Celebrity Dad of the Year 2010.

The 'Mysterious Girl' singer - who raises three children with ex-wife Katie Price - was thrilled to be given the award by Bounty Parenting Club, which received 35,000 votes to determine the winner. He said: "This feels so good. It's been a turnaround year for me and the kids and it's an honour to be the subject of the public's support and best wishes. This means a huge amount to me as being a dad is my most important role."

Since splitting from Katie in 2009, Peter has played a vital role in the lives of his two children Junior, five, and Princess Tiaamii, two, as well as continuing to care for his eight-year-old stepson Harvey - the model's child from a previous relationship. Faye Mingo, spokesperson for Bounty, said: "Our mums tell us that he's an inspiration for all single dads going through a tough divorce and that they respect the fact that he makes time and puts in untold effort to be able to enjoy the family life he values so much. "

Peter recently revealed he is a strict parent when it comes to disciplining daughter Princess Tiaamii. He explained: "She's not going to start dating - ever! I did a show recently called 'Odd One In' and one contestant was a nun. I asked her how do I get Princess into a convent before she starts dating? I want to be her Valentine's date for the next 54 years."

Peter Andre to release a book of photos

Peter Andre Is NOT Over Jordan (1)