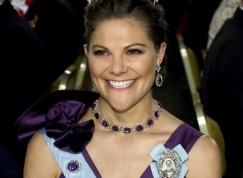 
At a toy fair in Nuremberg, Germany a unique figurine was revealed. It was a Barbie doll dressed in a flowing gown and wearing luxurious jewelery and a tiara - made in the image of Sweden’s Crown Princess Victoria.

“Crown Princess Victoria is a modern princess and an inspiring global citizens. Crown Princess is committed to charitable causes and helps to highlight those who are less fortunate. She is simply a role model for girls worldwide,” said Rosa Zeegers, the Senior Vice President of Barbie International.

Victoria joins talkshow host Oprah Winfery and German Chancellor Angela Merkel for being made into a Barbie doll. Her image is modeled after her appearance at the 2006 Nobel Prize ceremony.

The Crown Princess Victoria Barbie doll was presented together with two other dolls representing the world famous author JK Rowling and successful tennis player Kim Clijsters. “The dolls are a tribute and a recognition of the positive energy that these three strong women to our society. They are true role models for girls of all ages and personifies the values that Barbie represents. Whether you are seven years or seventy years old, you need inspiring role models,”said Rosa Zeegers.

Unfortunately for Barbie doll collectors and royal fans, the Crown Princess Victoria Barbie will not be sold in stores.

Victoria Beckham is Having a Baby Girl!