Commercials That Were Too Sexy For Television 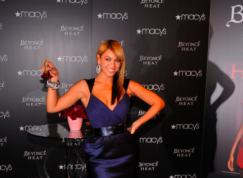 
Every so often commercials are released that cause a lot of controversy because they are deemed too racy for television.

But everyone knows a little scandal equals lots of press. The latest ad banned on television is Beyonce's HEAT commercial.

Beyonce is too hot for TV! The commercial for her first fragrance, HEAT was banned by Britain’s Advertising Standards Authority (ASA) because they deemed it “racy-but not explicit” for television. The commercial is not allowed to run before 7:30 p.m. because that’s the time kids are sitting in front of the television. I watched the commercial and it was so sexy I would buy the fragrance just to say I'm like Beyonce.

“Will all the men in the audience stand up?” Kylie Minogue says in the commercial for Agent Provocateur after she rides a mechanical bull in sexy lingerie. With that sexy video she’s got both women and men standing. Not to sound like a party pooper, but that commercial was wayyyy too sexy to be seen on television. I just got hot flashes!

When did a little bit of nipple become too racy for television? People are so uptight these days! Eva Mendes’ Calvin Klein commercial was banned on American television because it was deemed too racy by people that are way too uptight.

We all know the peeps over in the U.K are a bit conservative, hence why they banned this Levis commercial from being aired on television. It’s actually a really funny commercial that got me laughing out loud. It's too bad the Brits couldn't enjoy the commercial as much as I did.

This was just dumb! They show girls wearing close to nothing on TV all the time, but just because it was a big girl, ABC decided that they wouldn’t air the Lane Bryant ads featuring plus size model Ashley Graham. Shame on you ABC, big girls need love too!

Click here to see the top 5 commercials that have been banned on television for being too racy or inappropriate.