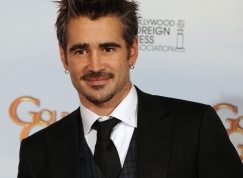 
Congratulations to Colin Farrell and actress Alicja Bachleda, who have welcomed a baby boy!

The Associated Press reports that Bachleda gave birth to a boy named Henry on October 7th. His full name is Henry Tadeusz Farrell. Colin and Alicja met while filming Onedine.

This is the second boy for Colin, who also has a 6-year-old son, James Padraig Farrell, with model Kim Bordenave.

Back in September, Colin told People, “Yeah, I’m going to be a father again. I’m very excited man! Very! There is nothing more exciting really. I will take it as it comes. Even changing dirty diapers.”