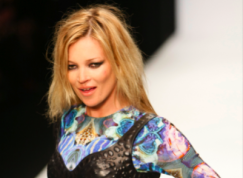 
Guess it's true that there's no such thing as bad publicity!

When Kate Moss' cocaine scandal made headlines in 2005, almost every major endorsement including Chanel, Burberry and H&M pulled out within days. It may have felt like the end of Kate's modeling career, but believe it or not, the scandal helped her double her salary!

Kate's agent Sarah Doukas says despite the scandal, her modeling fees never went down, in fact, it helped her! During an interview on Radio Four’s Desert Island Discs, Doukas said: "I basically just spent a lot of time on the phone trying to reassure her big clients that you can’t believe everything you read and, unfortunately, all press actually is good press in this world we live in. So keep calm, don’t have a knee-jerk reaction."

According to the UK's Daily Mail, Kate's annual profits have increased from £2million to £4million since the drug scandal. Kate was able to come out of the scandal and secure more jobs because she made an attempt to seem more responsible since the scandal, while other stars like Lindsay Lohan just keep making the same mistakes again. So if there's no such thing as bad publicity, is there hope for Lindsay?