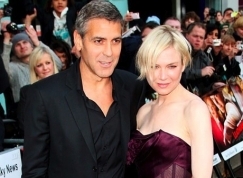 For most putting on a few extra pounds isn't a cause for celebration but George Clooney needed some tips to get himself looking portly for a film. So George turned to Renee Zellweger, who famously packed on the weight to play frumpy singleton Bridget Jones, for advice.

George needed to gain three stone for his role as an overweight CIA agent in political drama Syriana. He told the Daily Express: “When I found out I had to pile on the pounds – no way was I going to wear a “fat suit”, that would have looked so fake – I rang up Renée, an old friend, and asked how she managed to put weight on for the Bridget Jones movies."

"She told me that a few pints of Guinness every night and a couple of plates of pasta with lashings of cream did the business for her. It did the trick for me, too.”

George Clooney has found the One (3)