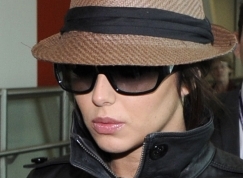 
Cheryl Cole’s last words to ex Ashley Cole before announcing the pair were to split up were ‘you disgust me,’ reports have claimed.

The Girls Aloud stunner was sat alone in her £4 million mansion that she shared with her soon-to-be divorced husband Ashley as she tried to sort her head out.

Cheryl, who released a statement confirming she is separating from her Chelsea and England footballer, didn’t even have her mother around to comfort her over her heartache. The Daily Mirror has reported she had a 25-minute phone call with her mum before informing the waiting public of her decision over sex-cheat Cole.

Cheryl, whose friends have been telling her for weeks to 'dump' Cole, has now seemingly stopped her solo battle of fighting for her love.