Cher´s daughter is enjoying life as a Man 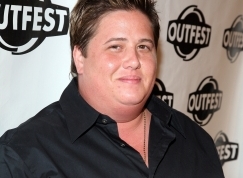 
In Chaz Bono's first interview since first announcing in June that he would undergo a sex change, the child of Cher and the late Sonny Bono says that after 40 years, he is finallly enjoying life as a man.

Chaz, formerly known as Chastity, tells Entertainment Today in an interview, that the ordeal was "a long process going back almost a decade."

According to Bono - who first came out as gay at 18, which caused mom Cher to reportedly flip out - the most difficult step he had to take was "finding the courage not to worry about what other people would think of me so much."

Bono has been undergoing a female-to-male sex change and gender reassignment surgery since March, and the process has already had significant physical changes on his body, which he jokes is like "literally going through puberty". "It lowered my voice," he told. "Fat redistributes, muscle growth, hair growth, sex drive increases... I shave about once a week now."

Now, at 40 years old, he has no regrets about his decision. "I always felt like the male from the time I was a child," he says. "It was just a long process of being comfortable enough to do something about it."

Cher Coming Out of Retirement Again