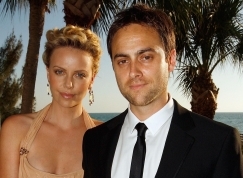 
Stuart Townsend´s nine-year romance with Oscar winner Charlize Theron, previously considered one of the most stable unions in showbusiness, has come to an end.

The stunning actress has told close friends that she decided to split from the Irish actor following a Christmas trip to Mexico and has since stopped wearing the antique ‘commitment ring’ that Townsend gave her as a symbol of their relationship. A friend of the actress said: ‘Stuart is gutted but Charlize said that she realised during the Mexican holiday that the relationship was over. They had become more like brother and sister than lovers. It was she who ended it.’

‘Charlize has remained in their main home in the Hollywood Hills, which is in her name, and he’s moved all his stuff into their Malibu beach home that they own together,’ the source said.

Charlize and Townsend met in 2001 when they co-starred in the thriller Trapped. In a recent interview Townsend said he considered Charlize to be his wife, even though the two never had a wedding. While Ms Theron can command more than £8million a movie, 27-year-old Townsend’s career has been less successful.

'I'm single for the first time in my life': Charlize Theron on why she's not looking for love