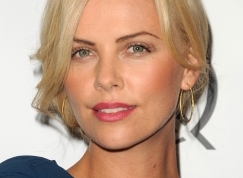 
Hollywood actress Charlize Theron stunned guests at the OneXOne charity event in San Francisco when she announced that along with a ticket to next year's World Cup finals she would throw in a kiss.

Theron was helping out at the fundraiser by auctioning off the trip to her native South Africa. When the actress - an Oscar-winner in 2004 for Monster - saw that the bidding was hitting a bit of a slump, she offered up a smooch with the lucky bidder.

On the announcement of the new addition to the prize, one gentleman immediately pushed the bid up to £79,000. However, he didn't win. A woman in the audience sealed the deal with a bid of £85,000.

Theron - who took over hosting the event after actor Matt Damon pulled out due to a "family emergency" - was shocked when an unnamed woman offered the staggering sum, but agreed to lock lips in front of the cheering crowd.

'I'm single for the first time in my life': Charlize Theron on why she's not looking for love