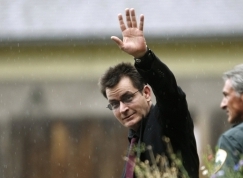 
Charlie Sheen is planning to “quietly” return to rehab.

The actor — who was taken to the New York Hospital to undergo psychiatric evaluation after allegedly trashing his suite at the city’s Plaza Hotel yesterday — is reportedly intending to admit himself for treatment at the Promises clinic in Malibu on an outpatient basis, similar to the care programme he undertook earlier this year as a “preventative measure”.

“Charlie is heading back to rehab but he wants to do it quietly,” a source said. “He may do it as an out-patient, which is what he did last time. He basically sleeps at Promises and does what he wants during the day. That way he won’t have to miss any work and he has his freedom.”

The Two and a Half Men star is believed to have tested positive for cocaine when he was admitted to hospital after police were called to his hotel suite, which he had smashed up, causing $7,000 of damage after accusing a prostitute of stealing his wallet. “Cops told Sheen he could either go to the hospital or the police station,” the source added. “After that incident a battery of tests were run on Sheen. He tested positive for cocaine. He’s only been out of rehab for two months.”

A spokesperson for the actor — who was nearing the end of a probation period set following a domestic incident with wife Brooke Mueller last Christmas Day — insisted his actions were the result on an “allergic reaction”, but friends of the star claim he has openly been drinking and using drugs.

“Everyone who knows what happened is laughing at that. It’s ridiculous. But Charlie is a big meal ticket for a lot of people,” said one insider. “He’s been getting drunk. He shouldn’t be drinking at all. He was wasted at a party a little while ago and a lot of people saw him. He even went home with a hot actress. Charlie hasn’t changed. He’s been partying like he did before he went to rehab.”