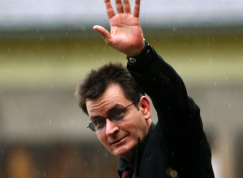 
Charlie Sheen allegedly had a ''briefcase full of cocaine'' delivered to his Los Angeles home just hours before being rushed to hospital two days ago (27.01.11) with severe abdominal pains.

According to gossip website TMZ, Charlie began snorting cocaine for several hours before being taken to the nearby Cedars-Sinai Hospital at 7am two days ago (27.01.11), where he is currently being treated. When asked about the reports, his representative, Stan Rosenfield, said: "I can't comment because I have no idea if it's true."

Charlie's condition is said to be "serious" and his parents, Martin Sheen and Janet Templeton, are with him as is his ex-wife Denise Richards, who he has two young daughters with. A Los Angeles City Fire Department spokesman confirmed they received an emergency call requesting help at the Beverly Hills address where Charlie lives.

"We transported at least one individual from that location to an area hospital."

In October last year, the 45-year-old actor was accused of causing $7,000 worth of damage to his New York hotel suite after tossing furniture around because of the monetary demands of the escort. Before the alleged incident, Charlie - who is currently in the process of divorcing wife Brooke Mueller, mother of his 22-month-old twin sons Bob and Max - was reportedly found by his assistant naked and covered in cocaine in a restaurant toilet.