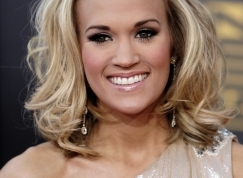 
Congratulations to singer Carrie Underwood, who just got engaged to her boyfriend Mike Fisher!

The Ottawa Senators player confirmed the news to the Ottawa Sun newspaper this morning as he practiced for tonight’s game against the Boston Bruins. "It's true," said Fisher. "We're both obviously excited and very happy."

Fisher’s teammate Chris Neil joked, "I think it's great. It's a long time coming. There's going to be a lot of broken hearts in Ottawa with all those girls who are in love with Mikey.”

We thought an engagement may have happened yesterday, after a friend of Carrie’s family congratulated her and Mike on his Twitter page last night. The couple has been dating for about a year.