Carey Hart Gets Tattoo of Pink 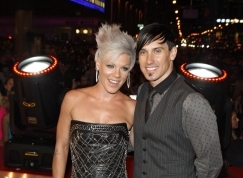 
With his superstar wife on tour in Germany, Carey Hart no longer needs to look far to see her – Pink is now tattooed on his leg!

On Friday, the motocross star completed the first of two tattoo sessions to ink an image of his wife on his body at his Hart and Huntington Tattoo shop inside the Hard Rock Hotel in Las Vegas. The tattoo is done in a "day of the dead style," Hart said on his Twitter page. The tattoo is of a skeletal-like Pink donning a black eye and a floral fedora.

The couple married in 2006, but split in 2008. Though separated, the couple still spoke often with Hart telling PEOPLE that Pink was still "the love of my life". The couple rang in 2009 together at Hart's Wasted Space bar in Vegas and announced in May that they were back together.