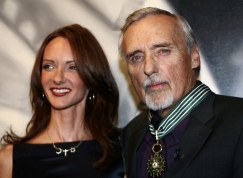 
In the midst of a grave battle with prostate cancer, actor Dennis Hopper filed for divorce from Victoria Duffy, his fifth wife, whom he married in 1996.

"I wish Victoria the best, but only want to spend these difficult days surrounded by my children and close and friends," Hopper (73) said in a statement published by BBC News. His rep told Reuters that the actor "wants peace and quiet."

The Oscar-nominated star cited "irreconcilable differences" in a petition submitted to L.A. courts Thursday. The couple has a six-year old daughter, Galen. (Hopper seeks joint legal and physical custody of the child.)

The Easy Rider star and father of four was diagnosed with prostate cancer in September and recently began a new round of chemotherapy. Hopper's eldest daughter Marin said in a statement, "Dennis is brave and he is fighting a hell of a battle."