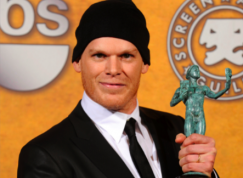 
We’re so happy to report that Michael C. Hall is cancer-free and back to work on Dexter! Earlier this year he revealed the scary news, but he’s back to his old self, and was all smiles at Comic-Con today.

He told People, "I count myself lucky on so many fronts – and certainly in regards to the Hodgkin's. It's a real gift to be able to go back to work," he continued. “One of the best things about it is that it emerged at a time when we were close to the end of shooting. I was able to treat it over the hiatus and it didn't interrupt our production schedule, which, obviously, would have its effect on me, but it would have its effect on our cast, our crew, people who count on this family to keep making the show."

Hall’s wife and Dexter co-star Jennifer Carpenter added, "It was amazing to see the support, which he would offer back to any one of them at any second – and does. The cast and crew,we spend a remarkable amount of time together. We do know each other's business, and there's a lot of love kicking around that set." Costar James Remar said that seeing Hall back at work "makes me the happiest man on the planet. I love him. I'm just thrilled and inspired."

What an amazing recovery! We’re so happy for him! We can’t wait for season 5, and here’s a little teaser for you fans from Showtime: The network aired footage from the upcoming season in which Dexter looks at a crime scene and says, “It was me.”