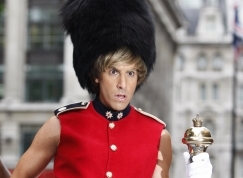 
Comedian Sacha Baron Cohen is being sued for 77 million euros in libel damages over his film Bruno. Ayman Abu Aita, a Palestinian grocer and peace activist from Bethlehem, says the depiction of him in the movie has ruined his life.

In Bruno, Cohen's gay character claims to travel to the Ein El-Hilweh refugee camp in Lebanon to meet a leader of the Al-Aqsa Brigades. A caption describes Abu Aita as 'Terrorist group leader, Al Aqsa Martyrs Brigade'. In fact, the scene was filmed at a well-known hotel on the outskirts of Bethlehem in the West Bank in an area under Israeli control, next to an Israeli army base. On American TV last July Cohen told talkshow host Letterman his production team found this 'real terrorist' through a CIA contact.

Abu Aita has filed a suit against Cohen, NBC Universal Studios and Letterman demanding over 77 million euros - equal to half the movie's gross box office takings. The father of four says he has since received death threats, he is a firm opponent of terrorists, and that he was tricked into meeting Cohen, thinking he was a German producing a film about the Palestinian cause.