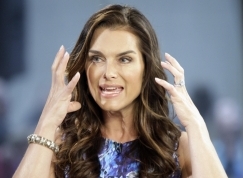 
Brooke Shields has been open about her struggles with post-partum depression, but in revealing new comments she expresses the true depths of her suffering.

Shields (44) spoke movingly about the stigma of depression and her experience battling the disease on Monday while receiving an advocacy award from the Hope for Depression Research Foundation in Manhattan.

"We think and we feel that we should just be able to handle it on our own," said the actress, who is mom to two girls. After a miscarriage and seven IVF attempts, she gave birth to daughter Rowan in 2003 with her husband, TV writer Chris Henchy. "I finally had a healthy beautiful baby girl and I couldn't look at her," she said of the depression she felt. In her deepest moments of despair she said, that the disease led her to believe, "I should not exist. The baby would be better off without me. Life was never going to get better – so I better just go."

Shields was prescribed medication, though she stopping taking it one point, thinking she didn't need them. "That was the week I almost did not resist driving my car straight into a wall on the side of the freeway," she told the crowd. "My baby was in the back seat and that even pissed me off because I thought she's even ruining this for me."