Britney Spears and Her Boyfriend Split 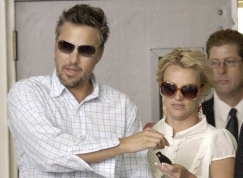 
Britney Spears has reportedly split from her boyfriend Jason Trawick after she caught him out with two other women. Brit was reportedly "distraught" after she found out Jason had been flirting with two women at Los Angeles’ bar Roger Room.

An eyewitness, who was at the bar at the time, told the Daily Mirror newspaper: "Jason left the bar with two bottles of water - and a stunning blonde who looked like Britney. “He had his arms around her and they looked very much like they were together for the night."

Jason's friends say they're shocked by his behavior because he's been very "loyal" to Britney so far.

“When she heard he'd been caught cozying up two girls in The Roger Room, it was the last straw. Jason's really not like this and quickly tried to calm Britney down and rectify the situation. He explained the girls were just friends and there was nothing in it but they still had a massive row. “Everyone is assuming it’s over – for the time being anyway.”